“I have traveled across the length and breadth of India and I have not seen one person who is a beggar, who is a thief. Such wealth I have seen in this country, such high moral values, people of such caliber, that
I do not think we would ever conquer this country, unless we break the very backbone of this nation, which is her spiritual and cultural heritage, and, therefore, I propose that we replace her old and ancient education system, her culture, for if the Indians think that all that is foreign and English is good and greater than their own, they will lose their self-esteem, their native self-culture and they will become what we want them, a truly dominated nation”. - Lord McCauley in his speech of Feb 2, 1835, British Parliament.

What I find extraordinary in the passage, and paradoxical, is Macaulay's respect for Indian civilization. His reaction is far from the typical European 19th century paternalism towards other cultures. His response: crush it. Well, nice try, but I don't think you succeeded, mylord.

Below's Animesh Rai's nuanced approach to the subject of English impact in India, as a comment to the passage by Macaulay. From his book "The Legacy of French Rule in India", p.145:

"The current Indian Prime Minister Manmohan Singh, in an acceptance speech at his alma mater, Cambridge University, very aptly stated that English in India was seen as just another Indian language.[1] While not entirely condoning the impact of British colonialism, he admitted that one of the beneficial aspects of the British Raj was Indians’ accessibility to English language and literature even though the English spoken in India may not be recognized by the former British colonizers as it is an indigenized version of the language. He also stated that many other countries in the world had also adapted English to their milieu. In an article analyzing Manmohan Singh’s speech, N.S. Jagannathan states that Macaulay is not well perceived among patriotic Indians due to his ill-informed denigration of Indians’ literary and intellectual heritage. However, Jagannathan admits that Macaulay was instrumental in inducting English into the educational apparatus of Indians as much as he was in the codification of civil and criminal law and the law of evidence."

"From Chaos to Classicism", and back?

It's incredible what a difference good curation will do. Is that what it's called, curation? Of course, I've been aware of this fact before, as in the exhibition "Les magiciens de la terre" at the Centre Pompidou, many years ago, which juxtaposed in the same space works by contemporary occidental artists - "Modern Art", with that of non occidental artists - "Indigenous Art". And demonstrated brilliantly that it's one and the same thing.
(The images are not from the exhibition, except for the painting by Balthus)

From Chaos to Classicism is deeply troubling. Here the juxtaposition of works by mainstream 20th century artists with fascistic works is very upsetting. Some of the latter are herrendous, almost laughable (check Paris in Brown Shirt outfit above), badly executed, clearly expressing an extreme political position endossing supremacy, submission, intolerance and other fascist values. These are not too upsetting, and have the advantage of reminding us that we have to be on alert, to look out and fight the resurgence of political movements which promote all or some of these values. Other works are more upsetting. For example those of artists (that's what they're called too, right?) who worked for fascism, in particular for Mussolini who supported some forms of art at the beginning of his government. Some of them are quite beautiful. The artist Mario Sironi was a cofounder of the Italian futurist movement who went on to promote fascism. Are his paintings acceptable before he joined the fascist movement? What about after? Should they be shown? And what about the works which are fullblown nazi and clearly horrible pieces of art, should they be preserved for posterity, as they have been in various museums?


The other upsetting works were those of the artists we have learned to celebrate such as Picasso, De Chirico, Balthus. Their paintings were sometimes very close to clearly fascist works, showing how a movement can be born and influence even the more progressive part of society, and its creators. That also rings as a warning in these days and times of various brands of fundamentalism.

Posted by enpleinjour at 3:34 PM 5 comments: 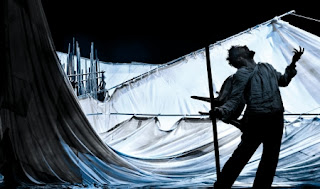 My son is taught in his school how to write an essay: an introduction, a meatier middle with details and quotes, a conclusion. Thankfully this is a blog entry where everything is permissible. In no particular order but my fancy:

To me -
Raoul is James Thierrée's best show so far at BAM. By far.

His previous shows were esthetic, and had magic, but were not always buoyant with meaning. The form he has developed does come from circus which resolutely skirts any depth to provide weightless entertainment. And there's something to be said for that. Thierrée's new show manages to retain the acrobatics and antics of the circus and combine them with the expressivity of theater.

In Raoul, Thierrée dwells on the human condition. There's not much of a story, no linear narrative. As in life. At times, he waits for something to happen. We wait too. We wait together. Then nothing much happens.

The pure joy of James Thierrée expressing himself with an orchestra playing out of his mouth.

The pure joy of James Thierrée becoming double onstage under our very own eyes. He was one, then he's two. Trickster.

He gets away with doing the ultra cliché slo mo miming. I was astounded, I would have thought that was an impossibility. The beautiful, abstracted movements fit into the whole mood of the piece.

James Thierrée seems to make references to some of his grandfather's iconic movements, without becoming referential. A delight. Charlie Chaplin was a master when it came to not being in control.

In the end his humility, his utter commitment as a performer, his imagination, his lightness of body and soul is incredibly touching. The audience was rapt. James Thierrée gave a last dance of joy, the joy of being appreciated by its audience as the applause went on and on.

About imagery but not a conclusion to entry, see note about not a school essay:
The imagery Thierrée favors is popular with many creators, mainly European. Dust. Red velvet. Old toys, including mechanical birds. Mechanical anything for that matter. long skinny shapes, made out of metal. Spider webs. Derelict rooms. Moth eaten lace. Morbid. Quaint. Spooky. Feels a lot like grandma's attic, associated with the emotions a child might feel there: curiosity, fear, tenderness, loneliness. Plastic, modern technology, bright colors are proscribed. It gets a bit repetitive, as a vocabulary, something that would appeal to teenagers because it's easy and flattering.


Posted by enpleinjour at 11:40 AM No comments:

From Animesh Rai, who has written entries previously on this blog, about the French presence in India, creolization and Glissant of course, here are his thoughts as he further studies this great writer philosopher.

In my current situation, my reading and re-reading of Glissant, in particular some of his theoretical essays in their original French versions such as Le Discours Antillais, Poétique de la Relation and Faulkner, Mississippi makes me feel like someone solving a gigantic jigsaw puzzle: bit by bit, things seem to fall into place.  Referring to my previous entry regarding Glissant on this blog, these readings are enabling me to simultaneously synthesize my earlier interactions with him, my thesis work and an overwhelming urge to understand the bearing and implications of his theories on the world stage.  While trying to take a full measure of it however partial it may be, I am struck at the same time by an exhilaration at the beauty of the writing which is not just elegantly poetic but analytic as well as synthetic in terms of the illuminating comprehension which it provides and perhaps as importantly, if not more, of the incisive questions which it raises and by a certain overpowering dizziness or giddiness best summarized by the word vertige in French. The result is an ensuing combination of sheer joy as well as exhaustion for Glissant will not yield himself without a considerable amount of intellectual as well as imaginative effort on the part of the reader.

For more contributions from Animesh Rai, go to: