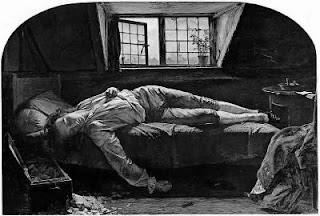 Publié par  - -  Arabella Hutter
Posted by enpleinjour at 9:55 AM 5 comments:

The Huly Buble by Jon Ferguson

I'm thrilled to have a new guest on this blog. Jon Ferguson is a writer, painter and basketball coach. Not buddhist, I think. Nitzchean, more. To find out a whole lot more about him, click here. 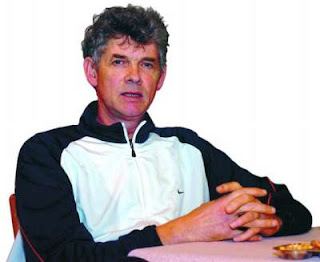 Jon again in prank mode (below with mic) 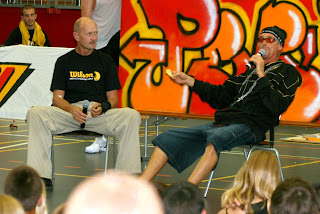 Jon writes mostly long short stories, or short novels which often exhibit a sardonic sense of humor. The Huly Buble is shorter, and the humor more concentrated. It serves as an introduction to Jon's latest novel "The Flood" which just came out in French: "Le Déluge" (Editions Castagniééé, Vevey, Switzerland):
http://www.castagnieee.com/index.php?p=10&l=31


The Huly Buble
Once upon a time, a time when things were happening just like they are now, but with variations of course, Gud decided that there was too much seriousness in the behavior of trees, rocks, spinning planets, and sunsets, so Hu decided to create mun and wumun. At first there was just one mun and one wumun, but Gud, being one to plan ahead, gave the mun a punus and the wumun a vaguna and the next thing Hu knew there were mun and wumun of different colors and sizes all over the place. In the beginning Gud really liked watching them fight over things like big sticks and pieces of meat, and Hu often laughed his uss off. All of this lasted for quite a long while and Gud stayed reasonably amused….But, as always, boredom began to set in and Hu decided to make a few changes. First Hu decided to make the mun and wumun talk, you know, make noises with their mouths and tongues and lips. But after a while these noises got to be very repetitive and Gud got bored again, so he decided to put a brun in the heads of all the mun and wumun. Up until this point all the decisions that the mun and wumun made were made in their punuses and vugunas and mouths. But now, with a brun in their heads, they had another engine to tell them what to do and which way to go.
It’s funny how all the mun and wumun started to take their bruns seriously. Whereas before, when the punuses and vugunas and mouths were responsible for what was going on, suddenly there were a whole bunch of new things happening in Gud’s funhouse. And the biggest things were all of the sudden the establishment of rulugions and murulities. Suddenly mun and wumun – mostly mun actually – started inventing all kinds of guds and murul principles telling everybody what was rught and what was wrung. Up until then everybody was just kind of eating, sleeping, furnicating, and dying, but suddenly people started to write books and give speeches at see anguls and have vusions about guds and stuff like that, and climb up mountains and telling everybody what was rught and wrung and how to luve their luves.
In Chuna their were people like Cunfucius. He was probably a pretty nice guy who didn’t overeat.
In Jupon there were things like “The Seven Guds  of Guud Luck”.
In Undia there were the Hundus with Guds all over the place running around with holes in their shoes.
And all around there was the bug duddy Buddhu who got his picture in lots of newspapers and who liked desserts and second helpings of food.
In Muxico the sun was Gud for a while until the Chrustians came.
In the Muddle East there was the mountain-climber named Muses who had a gud that got mad a lot and threw lightening bolts at sunners.
The Gruuks had some prutty guud guds too who even liked to drink good wine and show off their punuses and vugunas.
Then came Jusus who was really probably a pretty nice guy, but who got killed and accused of things like walking on water and feeding five thousand people with twelve loaves of bread by people like Puul, Juhn, Luuk, and Muthuw who started writing the Huly Buble.
Pretty soon there was a string of Pupes who got real rich, ate well, built nice buildings, and started  a series of wars.
Then Muhummud came long with Ullah and scarves became fashionable along with cutting off hands and fingers.
Then there were people like Luthur and Culvun who had seen enough of the Pupes and started new religions also based on the Huly Buble.
Then came the Prutustunts and the Murmuns, and the Juhuvuhs Wutnussus and the Suvunth Duy Udvuntusts and the Buptusts, all kinds of groups like that that were telling people what was rught and wrung and who the real Gud was.
It really got to be a big mess and the real Gud was becoming less and less amused by the whole show. Hu started thinking maybe Hu shouldn’t have put that brun in the mun’s and wumun’s heads after all.
Hu finally decided to have a flood and into the gurbage can went most of the mess.
© J. F.        Murges, June 2010
No reproduction in any medium allowed without direct authorization from author.


published by  - -  Arabella Hutter
Posted by enpleinjour at 12:39 PM No comments: