The 10 most underrated women writers

Starting by the pavilions is not a good idea for people sensitive to any hint of propaganda. The Venezuelan pavilion which actually exhibited some interesting art made no mystery of its intention (see its claim to being a peaceful nation in a time of absolute corruption and crime), unless it was supposed to be sarcasm which would be screamingly funny, I admit.
The Russian pavilion exposes a crowd pleasing installation of decors and automates inspired by famous works owned by the Hermitage. Come to Leningrad! Sorry, - come to St Petersburg, visit our beautiful Museum endowed with pieces by the Tsars before all that unpleasant communist business happened, make Russia great again. In fact, the exhibit refers to The Return of The Prodigal Son, by Rembrandt. There is a video with some war stuff. We could read it as a criticism to Putin’s war on poor Ukraine. Or as support to same. 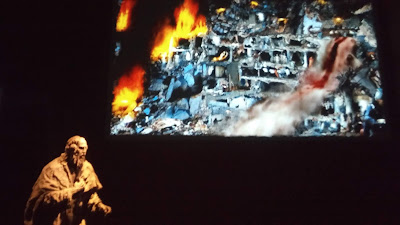 In the US pavilion, Martin Puryear comments on being American: subverted hunting trophies, the eagle, the tired myth of the pioneer. Isn’t that another form of propaganda even if the artist is well intentioned? See how democratic we are, we let our artists criticize our identity? The pavilion might be allowing free expression, but this is a facade for a country that has legalized torture and that tramples human rights when it comes to what is termed “illegal immigrants” who are generally people indigenous to the continent.

The Ghana Pavilion boasts the great Maestro El Anutsai, stunning self portraits from the 60s by Felicia Abban, and ... Yiadom-Boakye whose top selling work does not exactly express her African roots. 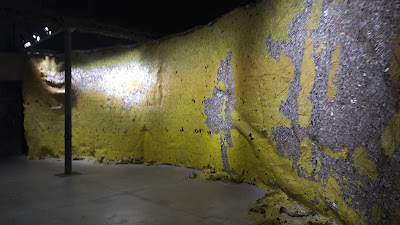 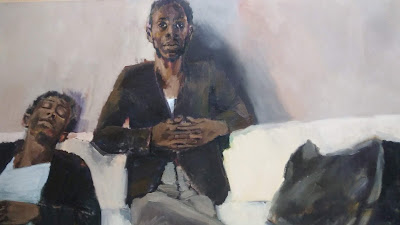 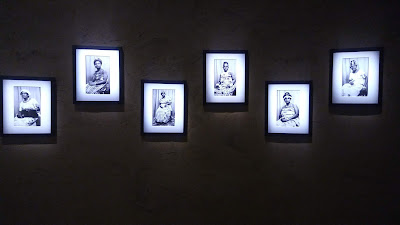 What does it mean to have countries show off art, artists in a pavilion? It’s a remnant of a time when countries had pavilions at World Fairs, promoting their national products and colonies. “A major study by Tjaco Walvis called "Expo 2000 Hanover in Numbers" showed that improving national image was the main goal for 73% of the countries participating in Expo 2000. Pavilions became a kind of advertising campaign, and the Expo served as a vehicle for "nation branding".”
The pavilions might show work similar to the Biennale's exhibit but they turn the art into propaganda as it contributes to promoting their image.
To foster the Biennale’s integrity, it’s high time to transform the pavilions into a different form, a difficult, costly decisions as the pavilions, these crowd pleasers funded by individual countries are a boon for the Biennale. The pavilions could have different subsections that could change each edition: social issues one year such as immigration, refugees, gentrification, water access, etc. And another year show art by creators that are underrepresented: outsiders, traditional woman craft, art by children, etc.
I was certainly gripped by the video installation of the Australian pavilion. Which strikes me as a country which is genuinely taking a stab (is that really the expression? So difficult to stay away from violent wording) at democracy.  The videos take place in an imaginary building. Images of people playing music, of meeting places, build a three dimensional space where change and exchanges can happen. Much needed utopia.

The German pavilion felt like a meditative relief with its rocks, its simple installation, its offer for people to sit and stop. A dam, exuding the power of an Egyptian temple, will hold the deluge for how long?

An animated fresco at the Chinese Pavilion:
In the Austrian pavilion, I was delighted to find Renate Bertlmann, an old favorite of mine.
The Danish pavilion exhibited an artist of Palestinian origins Larissa Sansour, a smart move to skirt nationalism. In one room, a huge black globe pushes the limits of the walls. Close up, the black as it absorbs all light, eschewing any shadowing, the globe looks flat, like a disk. Optical illusion. Just as on a daily basis we aren’t aware we tread a globe. But if we take the time to stop and think, we know it’s a globe, and it’s in serious danger. 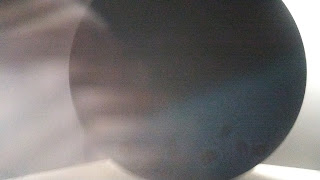 “May you live in interesting times” is the theme of the 2019 Biennale. It is apparently a curse that a wise man in China threw to an enemy, but its origins are unclear. I wonder what is the literal meaning of the ancient Chinese word, “interesting” seems such a modern concept. It was in fact denounced by Susan Sontag as being linked to capitalism.
The exhibit A, in the Arsenale, makes for a consistent experience. The artists chosen, the work presented, the actual exhibition of the pieces in terms of sequence and placement, form an expressive ensemble. Some artists’ pieces are all gathered in one space, others are sprinkled through the buildings.
A lot of the work feels genuine. That skirted the common case at Art Fairs of walking into through the exhibit and feeling like the works are all screaming as loud as possible for attention: look at meeee!!! Buy meeee!!
There are lots of films. Good films. But feels like a punishment to be stuck inside dark rooms when it’s so beautiful out. Like a physical version of the Internet with its motto: use videos, not still images, not words, to grab attention. Here's a film using big data and scientific data to make a rhythmical symphony of images. 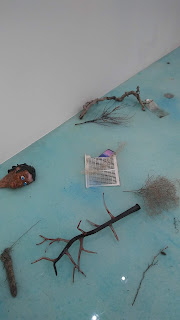 A lot of dried plants, weeds, seaweeds. Indeed our poor oceans know “interesting times”.
Some exhibits are smelly. Nice to have an additional sense stimulated.
A piece with interviews by Skype of soldiers of various armies: most compelling, the constant, the differences, and the sad fact that there are soldiers and there are armies, and as long as we have these, there will be wars.
Dominique Gonzalez-Foerster takes us on a virtual tour in a beautiful universe where we float or fly. Bubbles come by. Shapes arise out of nothing, stun us with their shifting form, their bright colors, it’s a creation story.
The gut wrenching photos of Soham Gupta, taken in the slums of Calcutta. Humanity reduced to its common denominators pushed to extremes - hunger, love, disease, fear-, the images stab us out of our comfort. A baby looks too big for his mother's body. 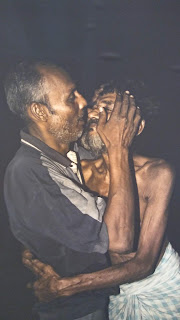 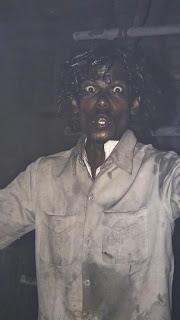 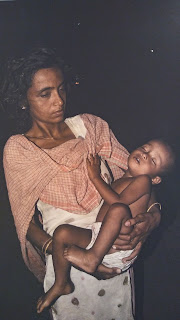 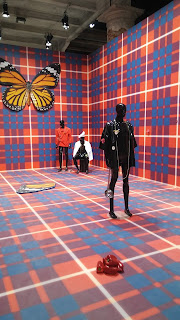 A piece of the Biennale's heart:


This piece by Liu Wei, Microworld 2018, refers to the molecular but has the size of the macroscopic for our appreciation, with its beautiful shapes and colors. Spectacular, while managing to retain modesty, as it typical of this edition of the Biennale, with its new curator Ralph Rugoff.

Questioning what it means to be "Asian" in our modern world, buddhist lama Khyentse Norbu presents options: 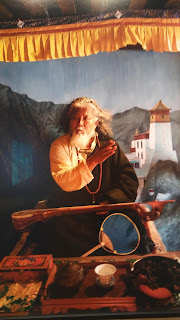 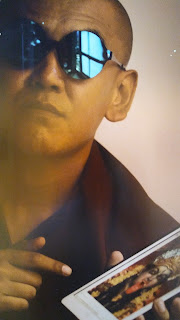 It's good to run into old friends. Painting, a trend making a coming back in the current art world, is well represented, here by Julie Mehretu. 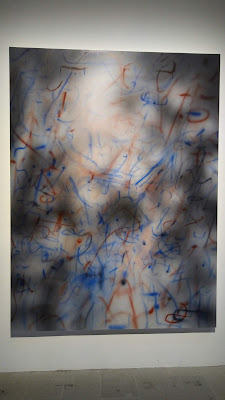 The Biennale also takes place in spaces outside its geography. 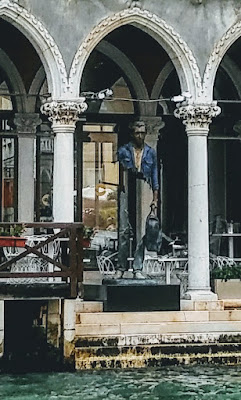 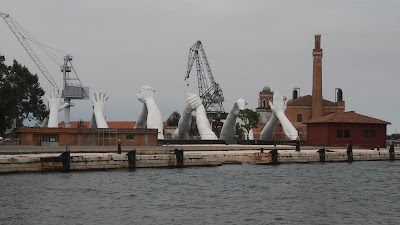 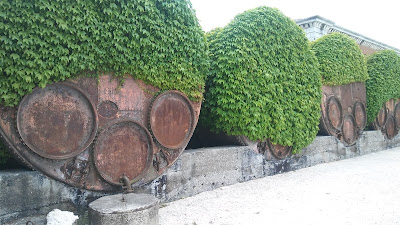 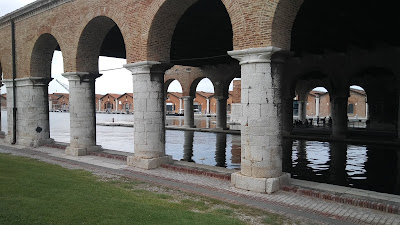 Finally, the wide diversity in terms of origins is welcome though still a lot of Americans and Europeans, but a disappointing number of women artists. Was parity not aimed for?! 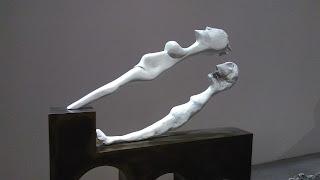 Posted by enpleinjour at 1:18 PM No comments: