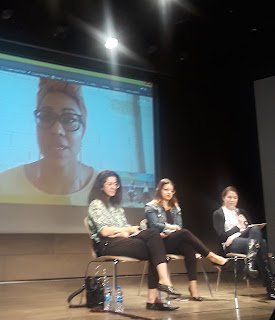 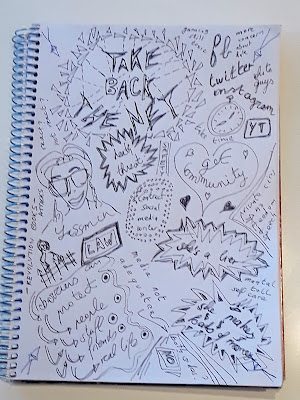 The most shocking item about this panel? Yassmin Abdel-Magied was denied entry in the USA, the custom officials arguing that her visa was inadequate, a visa she had used in the past for similar purposes. She participated in the panel via Skype.

Yassmin is an activist and a writer, she defends islam, and women, and muslim women. She has met with a lot of hostility in Australia, where she grew up, and has had to leave for her own safety and sanity. She spoke about how to survive harassement.

Toll on mental state:
Harassment takes a toll on mental state. Victims need to choose their strategy (ignore, react, respond, etc). They need to self care. Get support from communities around, from other victims of harassment. They can protect themselves with barriers such as

Harassment also takes time and energy away from activists, writers, artists, undermining their activities and production.

Anita Sarkeesian was the target of a sexist hate campaign of unbelievable proportions, when she tackled the sexism in gaming.

"The gaming world still hasn't done much to improve their misogynistic representations of women in particular."

Porochista Khakpour is a writer, journalist, editor of Iranian descent. She has been harassed both as a woman and a Muslim.

"Some writers have in their contract the number of people that have linked with their social media platforms, and they can't quit them if they fall victime to harassment."

She lives in Harlem within a community of Muslims. Some of them have become less vocal on social media because of the psychological toll that takes, including suicidal frames of mind.

It's very difficult to get the law to intervene effectively, to sue successfully.

Harassment has increased under the current government. Revolution Books in Harlem have suffered a huge increase of attacks.

Companies' attitude to harassment:
Facebook, twitter and instagram and other social media platforms were created by white American guys. They had little awareness about harassment, racism, sexism, and didn't think through the potential for harassment. Initially the companies did very little in terms of controlling hate. They're now doing a bit better. Twitter used to have a staff of 4 concerned with safety issues. Now they have a whole department, safety counsel, etc.

They do not have to give their users freedom of speech, as they're private companies. They can, and do now, set rules: such word can't be used, such behavior is inacceptable.


Anita Sarkeesian
Posted by enpleinjour at 3:31 PM No comments: 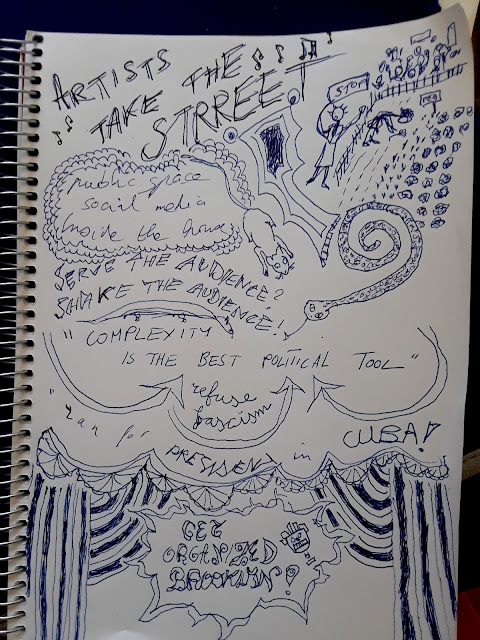 Interpretation of the notes above from the PEN panel Artists Take The Street:

Tania Brugera ran for president in CUBA! With, obviously, not a chance to win, but getting serious negative attention from government. She's a performance/installation artist. In one of her famous performances, she ate soil mixed with water and salt as a political act.

She made some compelling contributions to the panel. My favorite:

"COMPLEXITY IS THE BEST POLITICAL TOOL."

Amy Khoshbin discussed how she reflected on talking to people who believe in the right to carry firearms, while she was in residence in a state where that was prevalent. The complexity statement was contributed to that discussion, as both sides of the American political divide hold on to simple slogans and beliefs. Only by adding complexity to the discussion, to artistic expression, can we hope to bridge that divide, so detrimental to our society.

Amy also discussed how she defines the "street" as a space for artists: public spaces, social media. Tania added that in Cuba, inside the house is a "street" space that escapes police attention. It is also a space of expression in the USA that is less monitored, less monetized.

Anne Carson did not say much. So here's an extract from a New Yorker text that is still very poetical while fiction:

"Her visit ends. Back at home, the newspapers, front-page photos of a train car in Europe jammed floor to door with escaped victims of a war zone farther south, people denied transit. Filthy families and souls in despair pressed flat against one another in the grip to survive, uncountable arms and legs, torn-open eyes, locked in the train all night waiting for dawn, a scene so much the antithesis of her own morning she cannot enter it. What sense it makes for these two mornings to exist side by side in the world where we live, should this be framed as a question, would not be answerable by philosophy or poetry or finance or by the shallows or the deeps of her own mind, she fears."

Get Organized Brooklyn and Refuse Fascism are two organizations that were referred to during the meeting. That was the best take away from the panel for me, because I had hoped for more blueprints, more handbook tips, more practical examples.  Word on The Street was one of the few projects described, it involves big names, and big money: not very relevant to the common guerillera artist sitting at the panel. I guess we will need to come up with our own invented processes.

Remark on the notes above: the woman gardening in the upper right corner is just going about her business. She pays no attention to the demonstrators around her. And why not? 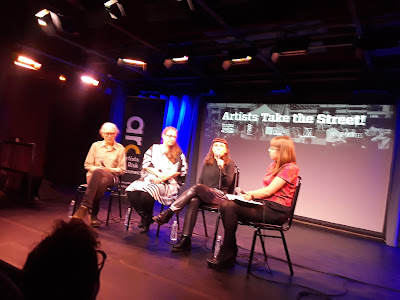 On the panel: Anne Carson, Tania Bruguera, Amy Khoshbin and very cool, very smart Carmen Hermo, who is a curator at the Brooklyn Museum


Posted by enpleinjour at 12:25 PM No comments: