Not a review: Ibsen’s Ghosts at BAM

The reviewers of the Almeida production of Ghosts are wrong and I’m right: it was ABOMINABLE.  Still on the warpath with reviewers, allow me. When we walked into the theater, a beautiful set with layers of glass (Yes! Ghosts were going to be appearing and disappearing between these layers! Clever!) was waiting for us on stage. I was excited. Its style was respectful of the period and place, while inventive and elegant. And then the maid, (couldn’t find the name of the actor who played her on the BAM website, forgettable socially, forgettable theatrically) ran on stage. I have a rule about theater which has proved quite correct again and again: stay away from plays that have a sofa on stage. There are a few exceptions to this rule (Lepage, Ostermeier), but on the whole it's proven itself. I’m thinking of adding a new rule: no young ladies running around the stage with their arms loose. Why should young actresses run!? It’s another theatrical cliché. Young men don’t run, older men don’t run, older women don’t run on stage. Children run on stage, and they should, because they do in real life. Or everyone should run if that’s an expression of an inner state. That young actress was signaling acting, she had been informed they were all the correct signals. 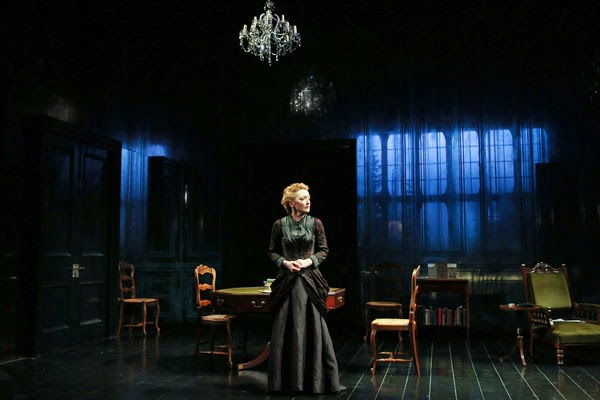 I tried to hang in there, a little bit of irksome running should not be a source of panic, the production could still be good. Was hoping the other actors yet to appear on stage might still act rather than act acting.Maybe just be the maid got it wrong. But no. All the other actors followed suit, a sure sign the director was involved. They were so convinced that they were acting right. Everyone told them. The director. The Oliver Awards. Even the New York Times. Well I dispute. Good acting cannot be self satisfied. Every night, setting foot on stage should be a risk. The appropriately named stage fright. That's one of the contracts between the actors and the audience. The actor who played the priest, Will Keen, was a bit less liked, a bit less sure, and therefore he was just a little bit more bearable to me. It could well be all these actors are able to act, but they were misguided.

At the end of the play, the son, actor Billy Howle, goes into seizures, then becomes blind. His physical degradation, the whole night, unravels in a collapsed time frame, which has to be dealt with theatrically. Richard Eyre did not come up with an effective solution to that challenge. Treated realistically, the resulting production is massively over dramatic. The mother, actor Lesley Manville, decides to give to her son the pills he had gathered to terminate his own life when the time came. Her tears provoked an all time high in my embarrassment for the actors. Which turned into ill humor when they came back to collect their - oh so well deserved as far as they were concerned - applause. 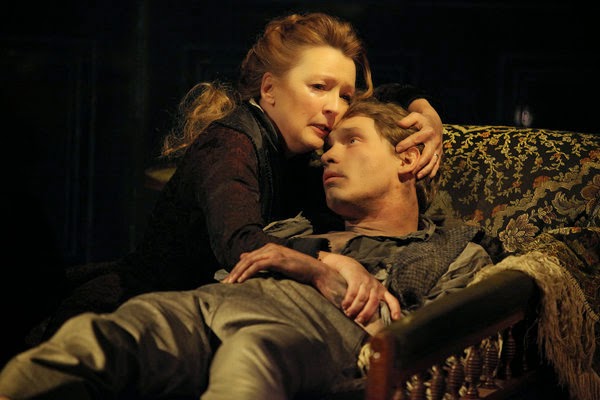 The one thing I enjoyed was the head of the young actor. It was overdimensioned. That was really interesting, and oddly satisfying. His whole head was half a size larger than would be expected for his body size. His eyes, his nose, his mouth, his skull, freakish in a good sense. That is all I got out of this production, the oversized head and the blue glass set.

I actually like melodrama. Visconti. Zola. Dickens. But this production’s combination of cocksure acting and heavy drama rubbed me the wrong way. Richard Eyre is on my watch list now, I’ll beware. The production was 90 min long, clearly not its natural stage length. And without an intermission. Thank god for small mercies, as Fiona Shaw repeated memorably in Beckett’s Happy Days. On that same BAM stage.

Contributed by  - - Arabella Hutter
Posted by enpleinjour at 1:19 PM 2 comments: Links to this post