This blog has become invested in the support of the MCUR, as an institution which promotes the meeting of cultures as well as the preservation of various cultural heritages. Here is an announcement from its organizers for an event more than appropriate on this All Saints Day:

Mystery of the non identical, in fact non fraternal twins at BAM

I mentioned in the previous blog entry about Deerhouse (http://bit.ly/bdyV7z) catching eye of two remarkable young men at BAM after the show. And wondering whether they were part of the show. I found them! They're called Andrew and Andrew, they're an act, and here they are, giving a much more tolerant review of Persephone, at BAM.
Posted by enpleinjour at 11:17 AM No comments:

I respect the efforts of creative people. It's hard to come up with something new and put it out there. It takes a lot of work and perseverance. Therefore I am not going to expand too much on the new show "Persephone" at BAM, out of kindness.

When I went to see Deerhouse a few weeks back, I came back with a well of questions about art and shows. What is nonsense? Is there good faith in art? What's a review? What is certainty?

Last night at BAM no questions  came swirling in my mind. Apart from: how many more seconds do we give this show to prove that it has a tiny spark of intelligence before we walk out? A minute nugget of meaning?

Uh. The projections were rather pretty.

The deconstruction of the play with actors and director seen behind the scenes is heavy handed. One of Julia Stiles' first line is:" the audience's going to think it's stupid. This is Brooklyn." Well, if the actors start reviewing the play in the first 2 minutes of the show...

I'll try to stay positive. Some of the acting in Persephone was bearable. The costumes were really quite pretty. A column near where we sat would hide Demeter from view from time to time.

If I covered my ears with my hands, the sound was less loud, the music less bland.

Below is a link to two people, the writer and composer, trying to make a convincing case the show has a meaning. Actually Ben Neil doesn't seem so sure, but is putting on a brave front.

There is one puzzling question: how does such a show make it to BAM? It must be some kind of machinery that, once it gets going, can not be stopped: the show gets a famous actress. The writer has gotten recognition in the past. The show gets financial backing. The show takes a lot of effort to put together. And finally, as what might seem a necessary last stage, is shown and seen. It is unfortunate that no one had the wisdom to stop this production at any of its various stages.

The NY Times reviewer is trying to be even more polite that I have been:

Back and forth between cultures

The trend this blog has taken toward multiculturalism delights me. I feel it has happened by itself, thanks to contributions and influences from various people such as Animesh Rai, Astou Arnould, M. Gobalakichenane, Dominique Aupiais, and of course, Edouard Glissant.

Here are just a few photographs from an exhibition at the Philadelphia Museum of Art, entitled Picturing The West: Yokohama Prints 1859-1870. It was forbidden for Japanese to travel outside Japan and the country was virtually closed to foreigners. In the mid19th century, trade was open with the West, and Westerners started traveling to Japan. Prints were in demand, picturing Westerners, as the Japanese were curious to find out what they were like. Some of the artists didn't actually see the foreigners, but inspired themselves from prints or from hearsay. An example of two cultures meeting and their cross fertilization. In the West the influence of many painters such as Van Gogh and Matisse by Asian art, and particularly Japanese print, is well known. It's interesting to see the reverse, and, as often in this situation, how people can project their fantasies onto the unknown other. I don't know how many American women from the Victorian era would have recognized themselves in the amazon galloping on a fierce horse through the snow, but what a beautiful image of wild femininity! It is in fact astounding to see how the image resembles Art Déco which would flourish decades later. Ironically as the influence from Asian art defined to some extent this early 20th century art movement, the Japanese touch in this depiction of a Western woman produced an Art Déco image before that movement existed.


American women were often portrayed with this head crown which
might have been inspired by native American head dress.
The images below show European prints which are not part of the Philadelphia Museum exhibit, just to show the interesting parallel between a Japanese print with Western influence, and European prints with Japanese influence. 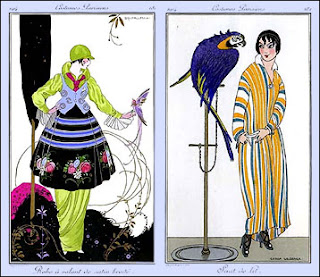 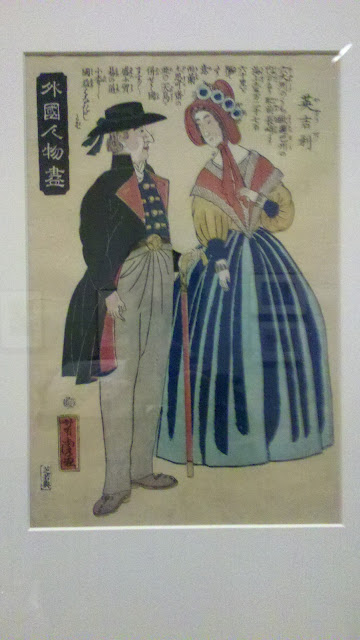 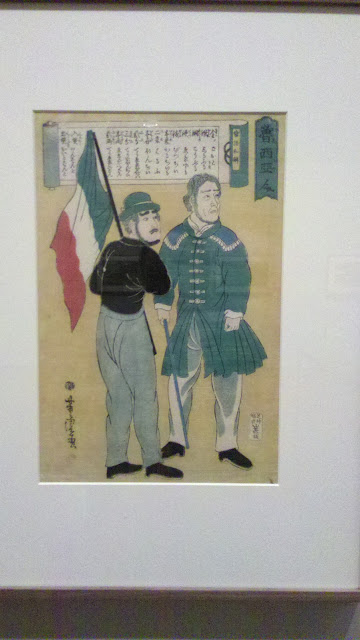 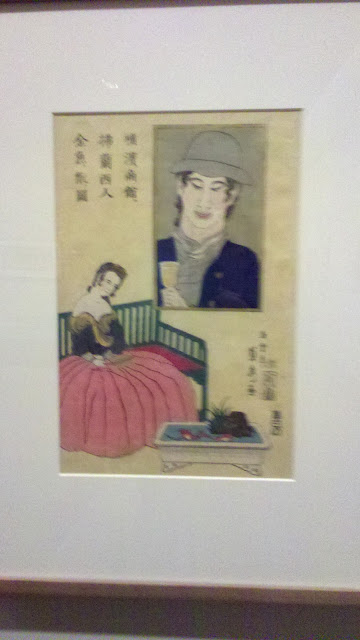 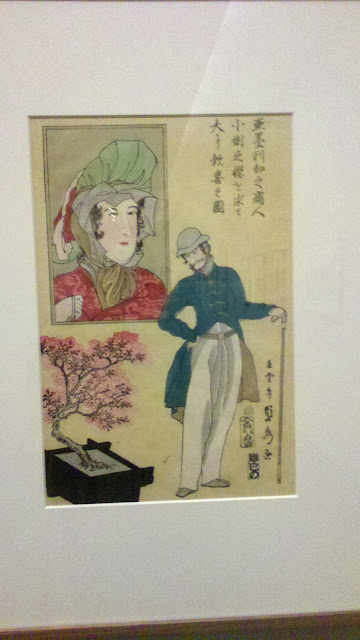 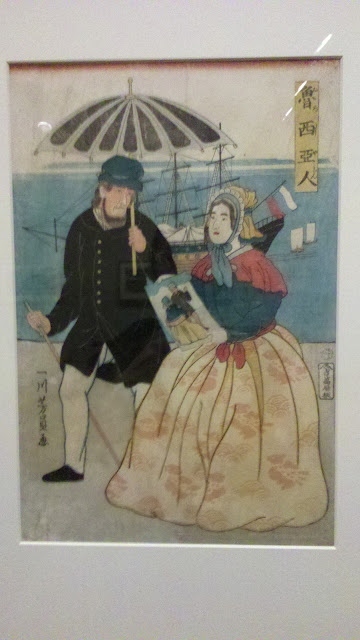 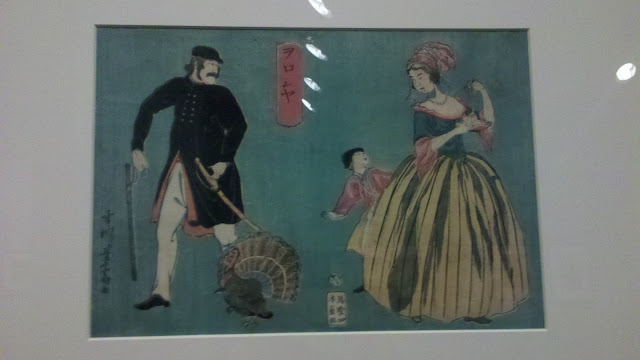 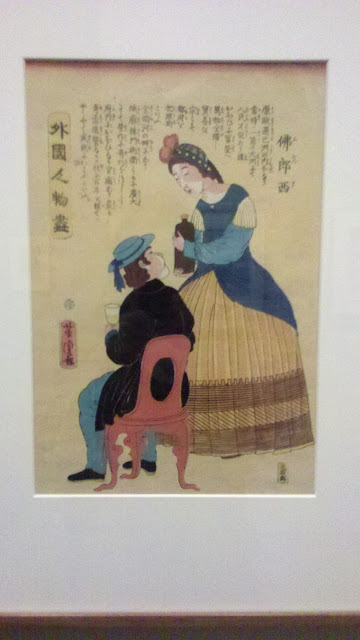 A French couple - with a bottle! 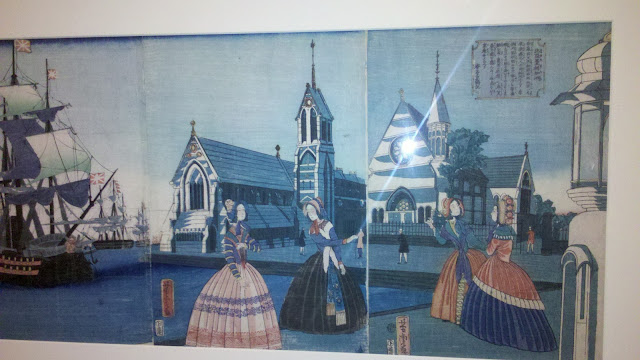 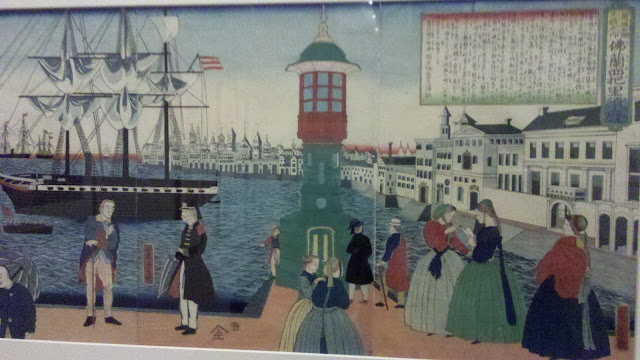 Paris
This blog offers more images and more information about this period:
http://community.livejournal.com/steamfashion/1062296.html
Contributed by  - -  Arabella Hutter
Posted by enpleinjour at 5:09 PM 4 comments:

The Secret of the Mysterious False Twins

Went to see the Deer House at BAM.
http://www.bam.org/view.aspx?pid=2227
Will not expand on this much.  The reviews have not been good in Europe and BAM was practically paying people to see the show. Have never had seating that good for such a low price! Nonetheless I was intrigued by the show. By its mix of tones, something I have become very interested in. While I watched the show, many questions swirled in my head, and to that extent the show was successful if art is also about getting one out comfort zone. What is tone? What is nonsense (the show veered in that direction)? What is fraudulent (also in that direction)? What is a critic and a review? "The show was this and not that, it was successful in this and failed in that." Assertions. Certainty. The more I go the more uncertain I get. It takes more confidence - maybe - sometimes - to admit uncertainty than to bang on the table to assert opinions.

After the show two guys were ferreting around the lobby. Look: 50's dork. They had exactly the same jeans jacket with a label on the back, the same hair cut (see illustration), same docker jeans, same leather bags, same glasses with thick upper frame, known in England as National Health as they were the only model offered free to patients for several decades. Their faces looked the same. I had to look twice to ascertain they were not twins. One was taller. Brothers? Lovers? Performers? One of them would be a geek, two is a performance or a statement. Anybody knows them, please let me know ASAP. Because the show had been chaotic and sent me into a cycle of questioning and confusion, I wasn't sure if they were real. But I was hugely amused. Then a guy from the bus service to Manhattan (you will be wheezed from Manhattan to BAM and back without setting foot in Brooklyn practically! Smoked windows allows you to ignore ugly reality out there!) leaned in my direction and said loudly : "What a smile!". He was also part of the show? Was I? Was Brooklyn? 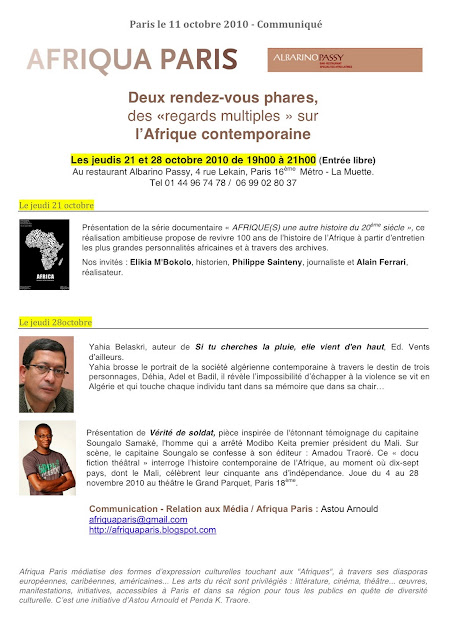 Publié par  - -  Arabella Hutter
Posted by enpleinjour at 8:33 AM No comments:

Mr Gobalakichenane contributes below precisions about the Anandarangappillai, as well as the English translation of page 59. Mr. Gobalakichenane grew up in Pondicherry and studied at University in France. After graduating as an engineer in 1963, he taught physics in South Vietnam. During that period he started to get passionately interested in Tamilnadu history, and later in Buddhism in South India. He worked from 1968 to 1998 as a computer engineer, while he explored further his area of interest, contributing articles and readings. He is credited for discovering Tamil Viranaiker's manuscript at the Bibliothéque Nationale. He's also president of the association Cercle Culturel des Pondichériens (http://www.puduchery.org/). At the end of this entry, you will find his complete bio.
Monsieur Gobalakichenane nous envoie des précisions sur le manuscrit d'Anandarangappillai ainsi que la traduction en anglais de la page 59. M. Gobalakichenane a grandi à Pondichéry et étudié à l'université en France. Après être devenu ingénieur en 1963, il a enseigné la physique au Sud Vietnam qui, sous occupation française, se nommait encore Indochine. C'est pendant cette période qu'il a commencé à se passioner pour l'histoire tamoulnadu, et plus tard pour le bouddhisme dans le Sud de l'Inde. Il a travaillé de 1968 à 1998 comme ingénieur informatique, tout en continuant à étendre ses connaissances et contribuant articles et conférences à son sujet de prédilection. Il découvre les mansuscrits en tamoul de Viranaiker à la Bibliothèque Nationale. Il est aussi président de l'association Cercle Culturel des Pondichériens (http://www.puduchery.org/).Vous trouverez à la fin de cette issue sa bio complète.
"In fact, Gallois Montbrun and Edouard Ariel (1818-1854) made copies from the original by tamil writers; Gallois Montbrun's has been recopied by the British in the end of 19th c. which was used for the English translation by Fr.Price helped by Rangachari, published in Madras from 1904 onwards –the first 3 volumes, the following nine others by H.Dodwell later. I asked to make a microfilm copy for Pondicherry which is now in IFP library. Gallois Montbrun's copy has been lost in Pondicherry in about 1916 while the original Diary has never been recovered afterward!  But after the demise in Pondicherry, at the age of 36, of E.Ariel who spent there his last 10 years (1844-1854), his copies have been brought to Paris and now preserved in Bibliothèque Nationale François Mitterrand; so, the handwriting of the facsimile is the writer's one and not Anandarangappillai's. But, in few other documents, we find the latter's signature in Tamil), and how beautiful the original is.


Translation in English of the page 59:
(Year) Angirasa (Month) Vaiyâssi 30 (Day) Guruvâram – June 8th 1752 (Thursday)
Today I didn't go neither to see the Governor because of intestinal problems.
I heard today that the last inimical relations between the Tanjoreans and our Governor have gone down a little.
News came that Chandâ Sâhib who was in Seringapatam had sent all men and was staying with ten 'kisumdar'. I heard also that only Gundo Pandit refused to go and stayed there.
It was said also that, among Mr. Law and Sheick Hussein men, those wounded and dead together with those European and sepoys joining the enemy could number about 2 or 3 thousand. Moreover, rice, curd, ghee, salt were hard to find and the little available  was acquired at very high rupees  price. It was said also that d'Auteuil and few sepoys were  in Vâlikondâpuram and Ranjankadai and that cavalry men and 'jamedars' went away because they had not been  paid.
(From H.Dodwell's edition, Vol.8, p. 105)
Thursday, June 8, - (the passages given above in italics are examples of those contained in the E.Ariel's tamil copy of Paris but not given in the English translation set of 12 volumes published in Madras)
There is news of Chandâ Sâhib's writing to the Governor, that M. Law has gone over to Muhammad'Alî Khân and the English, and ruined everything. The Europeans, Muhammadans and Tamils are all saying that they have the same news from the officers who have quarrelled with M. Law. "

- The Diaries of Anandarangappillai, of Viranaiker II and of their followers: Their Contribution to 18th c. South Indian History.

and other historical research papers

Posted by enpleinjour at 8:35 AM No comments: