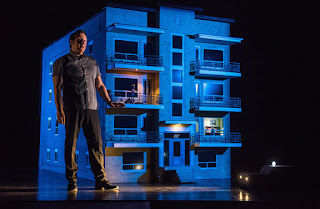 Robert Lepage has always had an unabashed penchant for technology on the theater stage. We have had decades of "physical theater' where props and sets had to be restricted to a column or a stick was the trend, as well as focus on the actor and the lines and the delivery of the lines. He's reintroduced the power of the trickster which is so enjoyable for the child in all of us. The world really lacks in magic, it tends to follow with stubborn sternness the laws of physics and basic ontology. A few people see UFOs and holy apparitions, but these are the lucky few.  In 887 Robert Lepage gives free rein to this passion for make believe to recreate the world of his childhood in parallel to his current one. It's pretty spectacular.  It would be hard work to describe every trick that is used: cameras on stage, moving trash cans, a building where every window is animated with little characters, etcetera etcetera etcetera etcetera, quite the delight.  He plays a lot with size as a whole building is smaller than he when he looks into his past, then he's in his kitchen that's to his size, and in a childhood living room where he is smaller than the TV and the lamp. The reality on stage shifts, and his identity shifts too as he alternately plays himself and his father.

The stuff with his father is very touching. Working class, his dad had to leave school at 8 - couldn't write or count much, and worked hard to support his family. Themes expand to celebrity and anonymity, Quebec politics, class segregation. And memory of course. It reminded me how much radio was still a large part of life in the sixties and in the seventies. I would lie in bed at my grandmother's and hear the neighbors' radio through the wall, and now I can't remember their name that I thought it would never ever forget. I wish I could recreate that lost world of my grandmother's, the way Lepage did for 887, the street number of the building where he lived as a child.

Robert is also just someone you want to look at, whether it's his longshore worker's body, which looks like his father's, his juvenile face, his peeping eyes. He's got perfect control of his hands. He's funny. He switches seamlessly from English to French. But still, I find it hard to watch a one person show that is longer than an hour or 90 min. After that, I think, oh could we please please have another actor enter stage? Reminds me of a Caryl Churchill play that was at BAM, a story about a woman and her son (Heart's Desire) About half way through the play, the kitchen that we had well got used to, suddenly all its cabinets opened and tons of kids run out of the cabinets! (this last sentence is not grammatical, because this is a BLOG) -  Imagine going to a one-person show, and a second and third person and a fourth, twenty more, show up unexpectedly, that would be so good.

During the show I started having restless legs. I usually only have it right before I go to bed and I have been sedentary during the day. But there I was coming out of the gym and sitting at the show and I was really annoyed and kept on rubbing my feet on the ground probably driving the woman in front of me crazy. There didn't used to be something called restless leg syndrome. I remember my sisters would complain about their legs when they went to bed at night, but there was no word for it. Now there's a word and now there are medications too, naturally. Maybe my legs were reacting to the show because, though the themes were compelling, though he's a great performer, there was a bit too much Machina too little Deus. I wasn't sure whether the play wasn't being fair to my legs or my legs weren't being fair to the play.

Written and published by  -  Arabella Hutter

Two operas that feel more like 20, and it's a good thing, Mark Morris, BAM 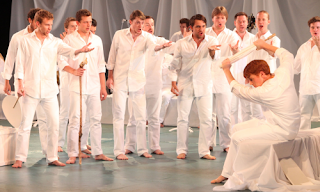 First opera: Curlew River, by Britten
The sad, tragic story of a mad woman looking for her lost son.

Musicians and singers of the chorus alike are dressed in white pants and white shirt. A white uniform, the color of Benedictine monks, doctors, navy officers, Edwardian cricket players. Collegiate groups, mostly upper class (need servants to keep it clean). As the set is also white, the hands, bare feet and heads create rhythmic elements that Morris is happy to play with, an elegant device that doesn't depend on the performers' movement skills.

The music is so beautiful. At the beginning a chorus from the middle age sings, so I thought we were seeing the Purcell first. The percussionist chimed in, to my surprise: we're in contemporary territory. The singing parts also are beautiful, but the style of the woman sung by a man is less conventionally operatic. It lost me at time, felt self conscious, particularly as it was the only part that was different, as did some of the mickey mousing of the music.
I would say that about 10 to 20 min into a show, there is a tipping point. For me, anyway. I go to the show with the hope that I shall be seduced. It does not have to be perfect. What will tip the balance for me is risk taking, integrity, inventiveness, and, yes, talent, or the show ends up looking like a high school production. Once I"m seduced, I have a lot of tolerance for the faults. Well, yes, the singers of the chorus in Curlew River are not great physical performers, even simple movements walk the line of amateurism. The musicians are a bit uneven. The flute: yes, lovely. The percussionist: definitely. The others, hm, I'm not terribly musical, but hum... Still I'm seduced, I'm with the production, I'm with the performers, I'm with the creator. I'd rather be seduced by the inventiveness, by the guts, than watch a solid production of a show where everything is good, skilled, but it doesn't change me, it doesn't send me to my own drawing board, it's forgettable and will be forgotten.
How much of the writer's voice is allowed in a review? Can I say "I'm not sure"? "I had the impression that ... blablabla..., but I'm not sure, maybe I'm not educated enough"? Or what if I missed the intent through pure thickness of brain, should I not be reviewing?
I was fast seduced by Curlew River. So achingly beautiful. Mark Morris understands the language of the stage. He knows how to manipulate the eye of the audience. At least, mine. I swear the dozens of white flip flops lining both sides of the stage appeared by magic Little origami birds arrived by themselves in singers' hands. And that innocuous bench in the middle of the stage, how come suddenly it turns out to look like a coffin?! More than conjuror's tricks, he understands intimacy between the performers and the audience will lead to the communications of strong emotions.

Dido and Aeneas, by Purcell
In the first opera, Mark Morris enjoyed bringing out the tragedy by favoring the single voices. in the second opera, he has fun, and we do too, with his dancers miming the opera on stage while the singers are down in the orchestra pit. 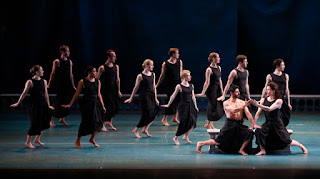 The first three acts were building up a comedy taking its wit from the ridiculousness of Pre-Raphaelite and pantomime, from Greek pomposity, from Roman decadence through Fellini and Weimar, 30s athletics, North Korea gymnastics, am I forgetting a period? It's a treat, after having watched the first opera performed by 19 men and 1 woman (the flutist) to have some strong female characters. Dido is Lysystrata, Lysander, Clytemnestra, she is strong, wild, baccanal, she is mad for good reason, Aeneas is deliciously pompous and sports the most spectacular mustache and back muscles.
The main role, the mezzo soprano Stephanie Blythe, has a huge voice that fills the theater, but lacks modulation, which takes away from the drama. The dynamics between quiet intimacy and strident pain express tragedy best. Seems to me. Because I'm not an expert, but then again, who is? Or maybe she was not having a good night.
While the pomposity of Greek vases, their symmetry, the folds in their chiton are amusing, while a balding man with Fellinian make up is delectable, there are some more menacing hints: that love of perfect classical form was taken up by the 1930s, leading to fascism and nazism. Synchronized movement is also a favorite propaganda tool of totalitarians. So is the nationalist penchant for folk dances which are also alluded to in the choreography.

I want to say a word about Pre-Raphaelite. Yes, they are a bit ridiculous, but what about the faultless technique, the fabrics, the human form? Could we bring them back a bit to the main light? Kitsch is what the classes controlling the art calls anything they don't produce and don't like. Pre-Raphaelite was once embraced by the upper classes but has now been swept under the sofa of good taste. It's particularly the work of Everly de Morgan that makes me argue for the unearthing of her work. And I also want to placate the little girl in me that loves her work.
One more thing about Pre-Raphaelite. I was always wondering why they were "Pre" when clearly the 1900s are quite a few centuries "Post" Raphael. Google? This group of English painters wanted to go back to art before Raphael, like there was something wrong with the painter. Funny thing is, some of Raphael's paintings seem quite Pre-Raphaelite to me...
While I was laughing my heart out at all the antics taking place on stage, I was having a private dialogue with Mark Morris: OK, this is all very funny, very witty, but for the 4th act, you need to turn around and deliver a finale to honor the beautiful music. He did, but it fell just a bit short of making justice to the composer.
No, it's not quite fair to Purcell, the opera's music is so beautiful. Plus it's an opera from the late 17th century, which seems to be the only period not featured on stage. But it's not evil, Purcell long dead is safe from getting upset, and what a wonderful divertimento!
Posted by enpleinjour at 11:42 AM 7 comments: