From Physical to Mechanical - Sans objet by Aurélien Bory at BAM


In the 80s physical theater was triumphant. The stage was bare except for a piece of fabric or a triangular piece of set which would play the role in turns of a ship, or a hill, or a balcony. Costumes tended to be subdued or minimalist too. The actors moved on stage nearly as dancers, they were the characters, the set, the stage, all the the same time, as in ancient Greek theater. Direct, unimpeded connection between the actors and the audience. I loved it.

Theater has been moving away from this trend. Lepage's 10 hr pageant at BAM 2 years ago celebrated the return of the mechanical in theater: an airplane! On stage! With lights to indicate the aisle. It opened, turned around, flew! A subway train crossed the stage too. A car, or half a car, and think of it, it was also half a plane and half a train wagon. Deus ex machina, except there was no deus. As audience, we are allowed again to enjoy being mystified, fooled, awed. I love it. 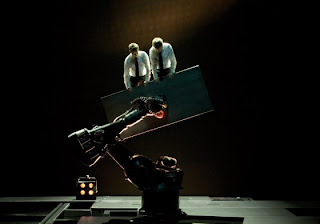 This transition might have some due to the explosion of the circus theater such as James Thierrée's which necessarily uses props and machines and tricks. And in Aurélien Bory's Sans Objet playing at BAM Brooklyn, the machine has the main role. Reasserting all its rights, off stage and on stage. The show was magical in the most elementary meaning of the word: the humans on stage escaped the laws of gravity. Is this beneficial or nefast to humanity? Probably both, just as technology helps and hurts our humanity. The lighting and sound and robot performance were beautiful, poetic while controlled with utter precision.

Another aspect I enjoyed about the show, and about Bory's work in general, is that I often don't understand why I laughed. I couldn't describe it afterwards with words. Once I was babysitting a 10 months old boy, and I was walking a puppet in front of him, and would make the puppet do an abrupt about face, with its limbs and hair flying all over. The little boy laughed and laughed every time. Why? How did he know it was funny, with what references? In the same primitive way the little boy laughed, some of the absurd movements of the robot and of the comedians on stage made me laugh. And obviously the rest of the audience too, from the ovation they gave the company at the end of the show.

Published by  - -  Arabella Hutter
Posted by enpleinjour at 2:59 AM No comments: