Not a review: Performa 2011 opening night

In 2009, a mindblowing Performa festival reinstated New York as a city where the arts are alive and kicking, despite the recession and general depressed mood. We waited two long years for the 2011 edition of Performa and, as opening night, we get "Happy Days In the Art World"? Why? It's a lame show with a lame text badly directed and featuring two actors who don't know what they're doing on this particular stage. And I'm not talking metaphysical angst. The lack of drama, the poorness of the dialogues, the egotistical characters offered no material for the actors to work on. In fact, a good third of the audience was falling asleep, in the lovely theater provided for the occasion. 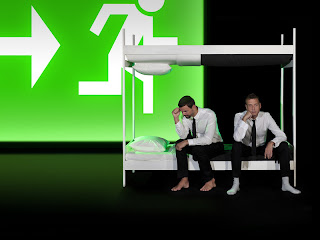 The show perked up a bit thanks to Kim Criswell. Departing from the self congratulatory mode, a real part was actually written for her, with things to say. And song. She did both beautifully. If the show had been any better before she appeared, she would have roused the crowd to their feet. But it could not be salvaged. The various outfits worn by people who paid $300 or $1000 for the evening were way more interesting. I wondered how they felt about paying this much money for the show, but I suppose it was just a short and unpleasant interlude between two glasses of champagne. In fact the show started half an hour late, probably waiting for the champagne drinkers to finish their glasses.

I stayed until the end because I wanted to see the crowd's reaction. Trust a New York audience not to be fooled by mediocrity. They clapped politely. Some friends of the performers or creators tried to raise the level of response but their efforts were lost on a somnolent crowd. In fact, when it was time to deliver the bouquets to the actors and creators, the lights had already come on and the audience was leaving. I haven't seen other Elmgreen and Dragset (how could they not be successful with these names?!) shows, and I'm ready to believe they're better than what we were presented with last night. But Becket didn't deserve this treatment.

The question left by the opening night dud is whether it's a reflection of the whole 2011 Performa? Not Avant-Garde, not audacious, not creative, poorly performed? Hope not.


Contributed by  - -  Arabella Hutter
Posted by enpleinjour at 10:18 AM No comments: