Sigmund Freud gets all artistic 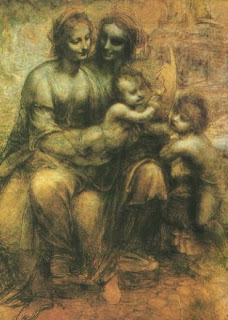 Leonardo de Vinci, a Memory from his Childhood by Sigmund Freud is singularly endearing. Freud spends many pages explaining what at the time might have seemed an extravagant theory: childhood events have a significant influence on what we become as adult without us being aware of it. His theories and that of other psychoanalysts have entered our general consciousness, and his protestations come across as naive: 'why, of course, Sigmund, it's called the subconscious!' At the same time the psychoanalysis of a long dead artist is a riveting exercise. And paradoxical as Leonardo, living in the Renaissance, would certainly have found these theories absurd. Unless...

Freud sketches out the little we know about the painter. Leonardo de Vinci was an illegitimate child. His father was a young notary, his mother a young laundress. The father married a woman of his own class the same year Leonardo was born, but the marriage remained childless. The barren couple adopted Leonardo who came to live with them when he was five. Quite a life changing event: different parents, different environment.

Here is Leonardo's memory. It was part of a text about vultures he was writing, possibly the only reference to his childhood:
"Questo scriver si distintamente del nibbio par che sia mi destino, perché ne la mia prima ricordazione della mia infanzia è mi parea che, essendo io in culla, che un nibbio venissi a me e mi aprissi la bocca colla sua coda, e molte volte mi percotessi con tal coda dentro alle labbra."
"It seems that I was always destined to be so deeply concerned with vultures, for I recall as one of my very earliest memories that while I was in my cradle a vulture came down to me, and opened my mouth with its tail, and struck me many times with its tail against my lips."

Freud explains the memory as having been transformed by Leonardo's subconscious. He interprets the tail as being an image of the penis, which takes the place of the nipple in the baby's mouth. The vulture is a representation of his birth mother. Leonardo was probably aware that in Ancient Egypt, vultures were believed to be all female and impregnated only by the wind. Like his mother. The altered memory expresses the absence of father in Leonardo's early childhood and the intense erotic relationship with his mother which, according to Freud, would have caused his homosexuality. However it appears that "nibbio" means in fact kite, not vulture. The text to which Freud had access had mistranslated the word. It's also interesting, in regard to this memory and its analysis, to consider Leonardo's obsession with flying, was he hoping to be reunited in flight with his birth/bird mother?

Speaking of homosexuality, a new theory has been offered by a Signor Vicenti that the Mona Lisa was painted after both the lady and Leonardo's favorite assistant and probable lover, Sallai. Here's quite a convincing comparison: 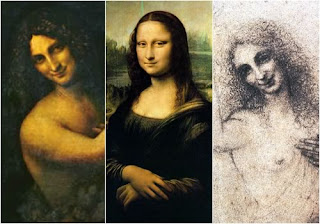 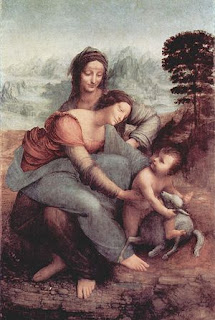 Freud goes on to analyze Leonardo's painting, St-Anne with Madonna and Child, see picture on the right. He points out how the two women's bodies seem to be fused and their limbs confused. They also appear to have the same age, with their identical Mona Lisa smile, when in fact they're mother and daughter. According to his convincing analysis, the pair is a depiction of the two mothers who hovered over Leonardo as a child. People have pointed out to the shape of an upside down vulture in the grey dress of the Madonna, with its head under her arm. It has been argued that the cartoon, above left, is a much later version. Freud argues that the cartoon came first and that Leonardo removed the small St-John on the right in order to separate the fused sitting figures. It seems to me that the cartoon has a more balanced classical composition, Saint Ann hovering in the background like a spirit, while the group on the painting looks on the verge of falling. This gives it a more dynamic effect, leading us to ask ourselves whether Baby Jesus will fall off the hands of his mothers. He seems to prefer the little lamb to his mother, and resents her interference. Wish Freud would have analyzed that too.

Freud said later in his life that this book was probably his favorite amongst the texts he wrote.


Contributed by - - Arabella Hutter
Posted by enpleinjour at 6:38 PM No comments:

Revenge for all or for none! 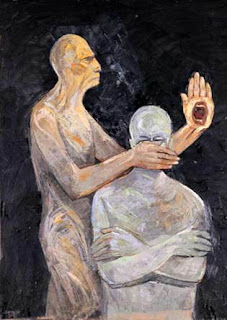 Revenge! OK, I'll come out with it, I have exacted revenge in the past. Details by request only. According to thinker Jon Elster," Some norms are sources of massive unhappiness, by imposing behaviour that can be pointless, difficult, expensive, or dangerous. This is true of trivial norms such as rules of etiquette as well as of very consequential norms such as codes of honour and of revenge". I am not sure at all why he would call revenge a norm, when it is more of an individual's reaction to another individual.

Anyway I have always been a bit embarrassed about my tendency to revenge, as if it showed a lack of maturity: everyone knows it's pointless to seek revenge, it does not make one whole. When I have taken revenged, I feel a certain shame, and some amount of satisfaction. But when I have not, my regrets last forever! I'm thinking of owning it. For the Greeks it was the most natural thing in the world. There might be more closure, when revenge is exacted. The Russians think it polite to walk on someone's foot if they walk on yours: no hard feelings!

If somebody steals something from us, we find it normal that they return it or make some kind of amend. We have the law on your side. But what about the offenses that are not reprehensible by criminal law:  if someone ignores our pleas for help when we're in a crisis? Criticizes our children? Cuts the line to get on the Brooklyn Bridge? Why should there not be some kind of pay back? Because, when you think of it, someone might have a better reason to steal (need) or smoke weed (fun) than to refuse a helping hand in a time of hardship (can't be bothered). If we're not going to exact revenge for those personal wrongs, let's not exact a cruel revenge for the law-breaking ones either - I'll support that motion.

Posted by enpleinjour at 10:51 AM No comments: