Went to the opening reading of the PEN Festival.  First batch of writers reading was great, one Cambodian American woman read about a father saying goodbye to his daughter as he knows he's going to be killed by the Khmers.  A Russian writer spoke about a woman school principal who would tell off the kids for begging chewing gum from visiting foreigners, saying they were debasing themselves.  The principal was later fired for allowing the reading of an unauthorized writer.  The authors were good at reading, but was their writing as good as their reading? 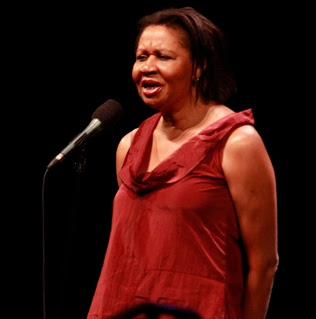 I was really there to hear Jamaica Kincaid.  Her prose awes me.  So powerful and fluid.  Not a trace of sentimentality.  How does she do it?  From the moment she made her way up the stairs on the side of the stage, her whole person exuded pain.  That grand old dame, bend over by pain.  That interior pain that flows in her texts.  Is it the price paid to escape sentimentality?  She takes the microphone and tells of creating havoc when she was in school and always getting punished.  At the age of 7, she had to copy down books 1 and 2 of Milton's Paridise Lost.  "It ended up not being a punishment at all, I fell in love with its character, Lucy.  And later named a novel after her.  I'm going to read from book 2."


In the exchange of love between the reading performer and the audience, that's all she was prepared to give.  She came fully prepared to disappoint her lovers' expectations.  If she had given us a reading of her work, we would have loved her all the more for it.  Her reading had a deep, beautiful stance to it.  But it's a hard text to listen to, and the audience was fretting.  She left, standing straighter in her brave loneliness.


Posted by enpleinjour at 2:28 PM No comments: