L'Amour de Loin at the Metropolitan Opera, NYC - not a review 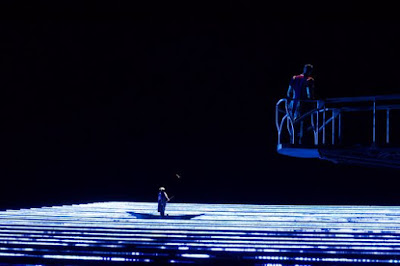 A show is the sum of its parts. Here are a few:

Lepage brings the ocean made out of colored lights on the stage, for our ecstatic experience. He lifts Deus on a Machina: a prince, who is a troubadour from France (Eric Owens). His love, a distant countess from Tripoli (Susanna Phillips). Lepage fakes the distant horizon on stage with lines that are smaller and closer together. A small pilgrim (it’s a puppet really, we’re not asked to be fooled!) rows his boat in the far distance. Goes off stage. Back on stage, he’s closer (a larger puppet on a larger boat, clever Robert). Off stage again. This time he comes back as a real person, a young pilgrim cum go-between (Tamara Mumford, who must get bored - and aren't we all - with mezzo-soprano roles crossdressing as young boys) singing like a nightingale on his frail skiff. The chorus pop their heads like mermaids out of the waves, or their hands like the tails of some marine creatures. Moonlit water. Huge waves in a storm. Lepage celebrates unabashedly the secret magic of the stagecraft.

It’s too easy being sarcastic, I shall not dwell on how hard it is to believe a very bulky man is dying on stage of deprivation. I shall neither qualify nor quantify the acting skills of the soprano. On the other hand, every one could sing, while the mezzo-soprano could both sing and act.

The orchestral and choral music might not have broken boundaries but the singing by most apt artists - it's the Met - was thoroughly enjoyable. An opera written by a woman composer (Kajji Sarriaho) conducted by a talented woman conductor (Susanna Mällki) on the same night at the Met?! Quite the femme celebration! Pour the Pro Secco out!

Best part? Libretto by esteemed Lebanese writer Amin Maalouf. What a treat it must have been for him to write poetry that people are actually going to listen to. In the 21st century. It’s obvious Maalouf immersed himself enthusiastically in this work. The lyrics, funny at times, are more often simple and poetic. A beautiful tale of longing for the Other, of crossings, of cultures coming together with a tragic end. In real life, what love encounter ever ends well? Unless both partners die at the very same time in their sleep, unaware of impeding death, their bodies entangled, while dreaming of love?

The sum of the parts was most positive. But not in the black. In the blue, and the pink, and the gold, and the silvery moonlight, all reflected by a Countess’s shiny dress. 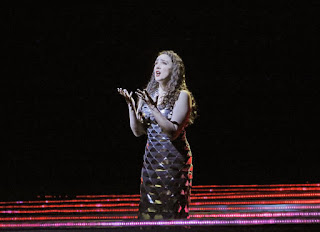 Posted by enpleinjour at 12:09 PM No comments: