Barber Shop Chronicles at BAM: infectious? No, more like, healing! 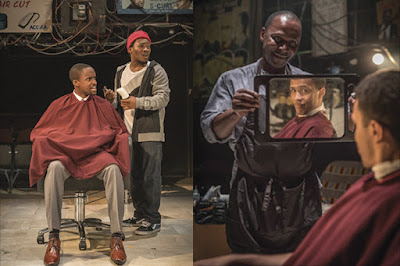 (the title of the post refers to the fact that so much of our vocabulary that should be positive is in fact negative: infectious, battle, crusade, armed with, etc. Down with death, war and disease, up with team work, care, love and peace)

Well, why should the actors and playwright have all the fun, and a reviewer only the dull, rationalistic role?
The minute you walked in the BAM Harvey Theater (which has undergone some work, including a gallery, what a grand idea, you can meander through it during the interval or on your way out, or on your way in if you are the kind of person who arrives early at the theater rather than out of breath with your coat half buttoned, and that gallery shows When A Pot Finds Its Purpose, a work by japanese-american (how many of these can there be, but welcome?) artist Glenn Kaino, a radiant installation with a political commentary),
well the minute you walked into that theater you were hit by a vibrant energy, a joyous chaos: actors, techies, members of the audience buzzing on the stage, off the stage, romping music, actors seating people (mainly young women, hum) in the barber chair, selfie opportunities, hip swinging, laughing, smiles on every face, lots and lots of cellphones out and busy recording. Went on and on: was that going to be the show? The whole show?

But no. People were gently shoed off the stage, and the actors threw themselves in a short music dance piece. The play The Barber Shop Chronicles takes place in 6 cities, 5 in Africa, the 6th being London. Some of the vignettes carry a story, others are situations involving caring, forgiving, conflict, and lots and lots of discussions about fathering and politics (a welcome parallel is made between father figures and figures of state authority) politics politics, and sports! The play takes place during one day, the final of a soccer championship between Chelsea and Barcelona.

There is a change of mood through the play that is well controlled by super talented Nigerian Inua Ellams). At first, it's a lot of humor, and the situations and lines were damn funny. The scenes get more serious, more emotional. That's always a risk: everyone wants to laugh. But cry? The emotions of betrayal, and loneliness, and loss were  conveyed gently, by the talented cast.

The transition between the scenes/locales is made by picking a bit of a sentence, a bit of a mood and  turning it by turning into a short piece of dance (movements brilliantly orchestrated by Aline David) and song: pure joy.

Was the play perfect? No. It does not have to be. Some actors were less talented than others. Some moments did not hit their full potential.

Can't wait to see more work by the young playwright Inua Ellams who was elected to the Royal Society of Literature!

Hum. There were 12 actors on stage. 12 men. No women. Zero women. It's in a barber shop, you say? Someone as talented at Ellams could think of one hundred ways of featuring women in this play. No, having just men on stage is not cute, it enforces that the norm is male. Ellams had better follow this up with the Nail Salon Chronicles...

Will Broadway buy the rights? The concern is that they are going to edit some of the more political, more philosophical materials in order to speak down to their audience. Don't do it.

Friday and Saturday night: DJs will be spinning after the show!

Posted by enpleinjour at 10:57 AM No comments: