10 reasons you wish you had Samuel Pepys’ life


I have been reading Samuel Pepys' diary. The abridged version: one volume of about 600 pages whereas the whole diary takes up 10 such volumes. It makes for a fascinating read, and offers such a unique insight in the London of the mid 17th century. It's a raucous time: he saw the execution of Charles I, the Restoration, the persecution of Catholics and Quakers and other non Anglican church believers, various wars, the Great Fire of London, the Plague. He lived from 1633 to 1703.

1. You have no schedule. He works for the Navy but no one seems to have heard of office hours. He usually gets up really early, but he might go to bed one night at 3am, and another day get up at 3am.
2. You socialize all the time.  He typically went to the pub two to three times a day. He has people over for dinner, at midday, or is invited. Also in the evening, but not as much. He had tens of friends, women and men alike, as well as relatives.
3. You go to the theater a lot. Pepys sees the same plays many times over. Here's what he thought of A Midsummer’s Night: 'we saw “Midsummer’s Night’s Dream,” which I had never seen before, nor shall ever again, for it is the most insipid ridiculous play that ever I saw in my life.' – well, he’s not remembered for being a literary critic.
4. Music is a huge part of your life. When Pepys goes home at lunch time, he often plays music on his flagelette (a wind instrument) while his wife sings. And then again at night. If he hears music played, a song sung, he cannot resist the attraction, and has to find who is playing, who is singing, particularly if they’re good. A talent for music will reinforce his friendships of which he has many. His wife asks him for a lady companion as they re going up in the world. At first, he renegades at the expense. But when the young lady comes and he finds she can sing, and is rather pretty, he yields.
5. There was little censorship yet, you didn’t have to worry so much about being correct. Pepys “shits”, and talks about his anus and his stools abundantly. And there is no correct spelling. He writes people’s names as he sees fits. And spells some words in various variants with no particular rule. Behavior also seems to have been looser, less repressed if a bit cruder. Pepys and his wife enjoy watching an execution on a Sunday, though these shows do get mobbed. A couple of Lords regularly enjoy running around the streets of London naked and singing "bawdy" songs. They get arrested by the watch, and the King has to go and bail them out. Then they all go to visit prostitutes together.
6. It was an exciting time, half way between an era of obscurantism and one of discoveries. It’s curious the irrational things Pepys will believe, when he is a man of intelligence, and passionate about science. He teaches his wife mathematics, and takes lessons himself from various scholars. He’s delighted that he’s been invited to belong to the Royal Society. There, he attends scientific demonstrations. He has a friend who invents an unsinkable double-shelled ship, the model of which gets sold to the navy, but the first one produced promptly sinks. An early Titanic.
7. Goods were precious. Pepys gets excited about getting a pettycoat for his wife, or a trinket. He's very excited about the purchase of a watch. Then he remembers he had had one, but didn't like using it! But he’s most passionate about books, each acquisition is a source of future joy: they offer knowledge to his avid mind, whether about microscopy or other parts of the world. Sometimes, he goes and reads at his bookseller, who seems to encourage it. The bookseller’s entire lot goes in smoke during the Great Fire.
8. You have flexible morals. Pepys, who never had to worry about #metoo, puts pressure on his suppliants’ wives to have sex with him. He describes these interactions in a despicable mixture of Spanish and French and English, producing a kind of Lingua Franca of misbehavior. That’s a most detestable aspect to his personality which is quite attractive otherwise. Moments after these spurts of fornication, he goes to church. Mostly to watch the attractive women at the service, but he does pay attention to the sermon which he is usually critical of.
He reads titillating books such as “L’Histoire amoureuse desGaules” then burns them because he does not wish them to bring him posthumous shame by being to catalogued in his library after he dies.
9. You are moving up socially. Pepys was the son of a tailor. He was smart and got a scholarship to attend Oxford where he learned Latin and Ancient Greek. He got under the protection of an aristocrat that was a remote family connection and entered the administration of the Navy. Thanks to his connections, and probably to his intelligence and social skills, he gets more and more responsibility, and he becomes richer. Every month, he makes his account to figure out how rich he has become. It’s fascinating to see him hit landmarks in that ascension: he purchases a powdered wig, which takes some encouragements from his servants for him to wear outside the house. Later, he plans on getting his own coach with coachman and horses. 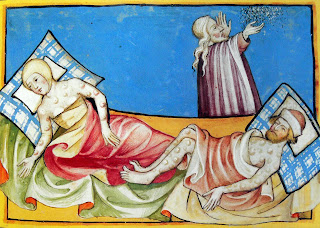 10. But best of all, you are always so glad just to be alive and safe. He escaped the great Fire of London, and the Plague. His account makes you realize that the Plague was much more lethal for poor people. Anyone who could afford it fled the City. It’s surprising how much it was business as usual. The government, the nobility, the bourgeoisie all transfer to the outer suburbs. And party away. Pepys takes a ferry back and forth to visit his wife. A ferry! That seems the worst place to be in a time of epidemics, the equivalent of taking a plane, as you know a sure way nowadays to catch a virus going around. The City is much more affected, and he worries every time he has to leave the countryside. He does mention stumbling in the dark on a corpse left on the street. But it’s not the image we might have of ghostly streets with barricaded windows and doors, of lone passerby wearing masks and walking close to the walls, head down. Maybe that mental picture of the Plague is closer to what the situation was like in mainland Europe. At the end of every month, he takes the time to review his situation, and he thanks God for him and his wife being in good health, for his good economic situation. Almost everyday, he eats and drinks and sings with friends, reporting in his diary they "made very merry".

SOON TO COME: 5 REASONS YOU DO NO WANT SAMUEL PEPYS' LIFE!


Posted by enpleinjour at 5:38 PM No comments:

I was bored at Mark Morris’ Pepperland! I swear!