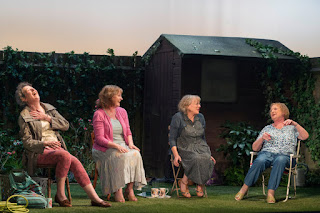 The Visitor, Mrs Jarrett spies 3 retired women sitting in a backyard in England, London probably. They invite her in, after all she's one of them probably, retired, with a detestable taste in clothes and hair style. They offer her a cup of tea. Hyperrealist set.

The women don't finish their sentences. Caryl Churchill can't be bothered, and we are grateful, because we can finish them ourselves. They talk about birds, what bird would you like to be, eagles or blackbird. They talk about cooking: I don't like to cook since I killed my husband in the kitchen.

It's a safe, dull environment. The one who killed her husband and went to jail for 6 years at least has something to discuss. Her son won't see her. The 2nd woman is depressed, she'd like to travel to Japan but going to Tesco is a challenge. The 3rd one, terrified of cats, wishes she had someone in her life she could trust to reassure that there are no cats inside her drawers or pillowcase. Loneliness. They're retired. We don't learn anything about the Visitor, but she seems to fit right in.

It's not about psychological insight. Much closer to Beckett: it's a situation, things happen to them.The actors don't worry about what their motivations are, this is no method acting time. In the loneliness of the characters, their emotions are stunted. Little puffs pop up here and there. 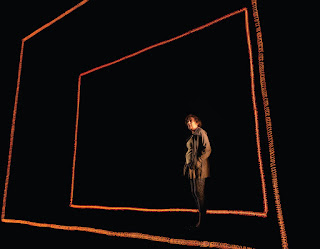 Suddenly, and I mean, really suddenly, the set's lights switch off and the Visitor magically appears in the foreground, as a barker at a fair. A different reality. She describes an apocalyptic world. The rivers flow backwards. Beds and dingy and swimmers float on the stock market. There is no food, and most of it go to TV shows, so the obese sell slice of themselves until they get hungry and eat rafters of their own fat.  After children and politicians set houses on fire, a whole country burns down.

Back to the women. They are surrounded by a wooden fence. From time to time a car is heard. They talk about the neighborhood: didn't a newsagent replace the fish and chips on the corner?  We have to take their word for it, because, what is behind that fence? Is it the apocalyptic world the visitor describes? If it isn't, that apocalypse could happen anytime, burst their little bubble.

It could be argued this manmade apocalypse is interior to the old ladies, its potential certainly. Play goes back and forth between tame backyard and apocalyptic fairground.

One moment of sweetness: they sing  in unison an old doobop song from their youth. For a short while, they're not alone. They're playful. Nothing else matters.

Wouldn't have minded a second act, and a third for that matter. But I suppose Ms Churchill didn't see the point, same as finishing sentences...

At the end, the Visitor leaves and closes the door on the microcosm of that backyard: "I thanked them for the cup of tea and went home."

Well received by audience. By me too.

Posted by enpleinjour at 9:35 AM 4 comments: