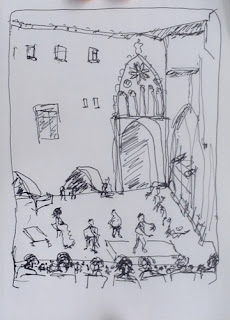 When is it too much chaos to make for a show?

Hard to tell. I can't guarantee I did justice to the show. I was sitting too high up, why sell seats that will not let you enjoy fully the show? They were the only ones available. Plus, after a month of traveling through Europe, Paris, Venice, Lutry, Avignon, I went to see the Fiesta of Israel Galvan the night before my return to the United States. I was in between continents.

I liked the Fiesta concept, the end of a party when you're tired but you do not know if you want to leave, you're tired but you don't know if you want to sleep, when you've drunk all night, but you do not know if you're inebriate. Unfortunately, there seemed to be no organizing principle to the show, I only perceived noise. Noise when it came to sound, and to the staging. Discordant sounds. Small pieces of snippets of things, which seemed to happen by chance. Yes, in life, it's like that, but life happens to me, while there, I came to experience what the creator had to say, sitting on an uncomfortable seat that had cost me a round sum.

I had not come to see a classical flamenco show, the Avignon Festival is not the place. A few years ago, I attended a flamenco contest in Madrid, in a restaurant, an authentic experience of its own, even if not all dancers were gipsy.

The noise was so tiring, I lost patience and thought of something else. A little sketch to distract me, the courtyard of the Palace of the Popes is a marvel. The whole town is a marvel. 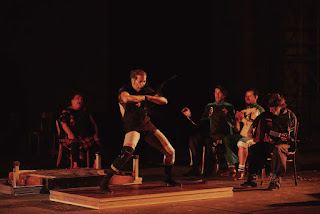 If there was some kind of plot, I did not pay enough attention to grasp it.

A woman sang a baroque tune admirably, while a man shouted druing the whole song in a strident voice. Throughout the show, every time he intervened, his grating voice ground my bones. At one point, he lay on his back, I hoped he was dead. But he got up. The last ten minutes of the show, Israel Galvan scraped his heels on a microphoned platform. I wanted to cry out, pity on us, pity on our ears! I would have left, as a number of spectators did throughout the show, but I was too curious to witness the reaction of the audience. The show seemed endless. Less than 2 hours in reality.

I wondered at one moment if it would continue until all the spectators had gone away, by snatches. A cool concept, a real end of the party where we are not sure why we decide to leave: fatigue, the prospect of rising the next day, the fray of pleasure, realization that probably nothing more exciting will happen.

Verdict from the public: I would say that about 2/3 was enthusiastic, ¼ booed, and the last portion (I will not calculate, this is a blog) either applauded weakly, or not at all. I belong to the last group. I did not boo, because I did not see in this creation dishonesty, a vice that I can not bear, nor pretentiousness. For me, it was a messy show, which had the potential to be successful if it had been more organized, more sequenced.

I loved :
The gigantic shadows of the dancers projected by lamps on the floor on the gigantic walls of the Palace of the Popes.

The woman in standard flamenco dress who not only does not dance, but ends up being tortured. We can see classic flamenco crucified, but I also thought about the condition of women in flamenco culture. Some gypsies allow their women to go to the saddle in the toilet only when they are not present at home, by repulsion.


The new forms of theater, whether dash circus, dash dance, dash cabaret, have brought vigor and freshness to the stage stage, as in the show The Great Tamer. During the Fiesta, I began to long for a story, any story, with a beginning, plot reversals, and an end, characters, suspense: what will happen next? Having limited patience and resilience, I was waiting for only one thing: the end.