A paradox in the art of memory

After taking a joyful detour by Pondicherry, the Indian Ocean Islands, New York under the snow, and a flamenco show, we're back to "The Art of Memory" by Frances Yates. My interest for this book does not stem from a desire to acquire mnemonic tricks. I am sure bookstores sell books, amongst the thousands of self help books on their shelves, which offer these tools. I wanted to introduce her book because of an interesting paradox developed by its thesis. She argues that the mnemonic technique developed in ancient times, and modified in the middle ages, has influenced the shape of western culture. During the middle ages, instead of situating objects of memorisation in a temple, scholars placed them in paradise. Or hell. This imaginary space was divided into circles, alcoves, to offer the loci necessary to memory. Yates puts forward the hypothesis that this structure, devised to serve as a mnemonic tool, has conditioned the conception of paradise and hell. And, furthermore, has contributed to the western obsession with classification and fragmentation. See frescoes and altarpieces from the middle ages, many examples at the bottom of this blog. Hell (and Paradise) by Dante. There is something delightful to the mind in this paradox, i.e. that a technique to memorize cultural products has evolved into an instrument of change of this very culture's Imaginary. Hence the works that one would memorize, such as Dante's texts, would have been transformed by that very memorization technique. Then again it could be complete bullshit.

The art of memory's relationship to the Imaginary changed direction again in the 16th century. Giulio Camillo built, without ever finishing it, a Theater of Memory (see above a representation produced by Yates). This half circle made out of wood was divided into seven parts which were in turn divided into seven, and then again into seven, resulting in 343 compartments. The divisions followed astrology and bore emblems and symbols. Standing on the stage, the viewer could see at once the total knowledge ... of alchemists. After having transformed the religious Imaginary in the middle ages, the art of memory became esoteric in the Renaissance.

NB - I have used "Imaginary", as no translation for the French term "l'imaginaire" exists, which is defined as the collection of images and fantasies pertaining to the imagination. 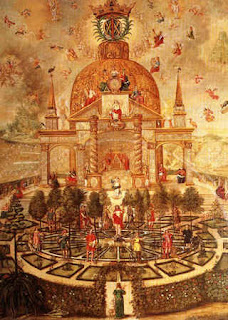 a garden of memory (which doesn't quite relate to text above, sorry) 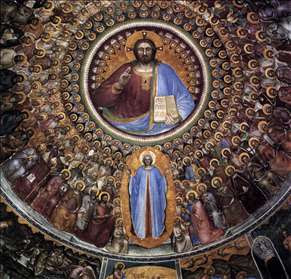 Fresco of paradise, by Menabuoi 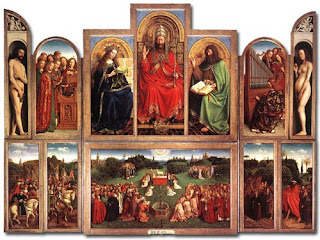 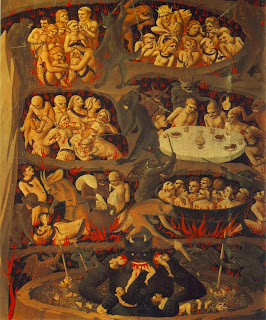 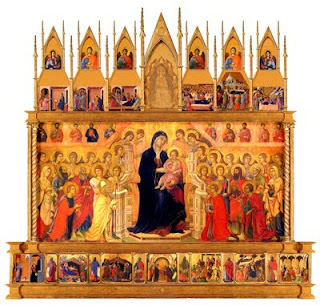 Contributed by - - Arabella Hutter
Posted by enpleinjour at 12:40 PM