October 2010. The seat next to Alma is free. She offers it to a man standing in front of her. He's holding a large satchel, the kind inspectors carry, and under the other arm a blood red stuffed animal. At first he turns her down, then changes his mind and sits down. I say:
-    She probably offered you the seat in the hope that you would give her the beanie baby.
I wasn’t sure about joking with him. Skinny, with a shaven skull, there’s something mystical about him. Is he going to sell us a miracle health supplement or a religion? I'm relieved as he laughs freely. 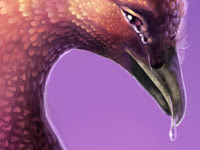 • Won’t happen! This beanie is the prototype of a mascot. The police and fire force’s Olympic games will take place in New York in September 2011. 9/11, same as the date of the attack. We want to commemorate the 10th anniversary in a positive way. This mascot is a phoenix. Do you know what a phoenix is?
• Yes. A bird that is reborn from its ashes.
Alma is keen on Greek mythology.
-  Impressive! Do you also know that its tears cure and heal?
He’s part of the organizing committee. His trips take him all over the world. Unlikely destiny for a fireman from New York. In that case, why the technical satchel which probably carries only paperwork? To assert his loyalty to his working class origins despite his white collar job?

A year later, the games do take place but no sign of a Phoenix beanie baby. Despite the bird's symbolism, the organising committee must have rejected it. Alma could have been given it after all: http://2011wpfg.org/
Posted by enpleinjour at 1:13 PM